Automation in the banking industry

Did you know that on June 27 1967 the first cash machine, or ATM as we’ve come to know it was unveiled outside a Barclays branch in Enfield, north London? Transactions were initiated by inserting paper cheques issued by a teller or cashier, marked with carbon-14 for machine readability and security, which in a later model were matched with a six-digit personal identification number (PIN). At the inauguration, the lead engineer, John Shepherd-Barron stated: "It struck me there must be a way I could get my own money, anywhere in the world or the UK. I hit upon the idea of a chocolate bar dispenser, but replacing chocolate with cash." (via BBC)

If you look at the banking industry today, it’s impossible to miss the major changes that the advances in technology have prompted over the last 50 years. If you would have asked a 1967 bank customer how they imagine their bank in 2017, they might have successfully predicted a highly automated financial institution.

As it often happens when predicting the future, both customers and financial experts expressed high expectations as to the role technology would play in the evolution of banking services today. What we’ve now come to realize is that the mass adoption of new technologies is a slow process, due to economic, legal and societal hurdles, meaning that technological substitution often does not take place as expected. What we’ve foreseen 50 years ago or even 10 years ago might not stand true, even in the context of recent developments in artificial intelligence, blockchain technology or quantum computing.

As part of our new Then and Now series on the blog, we’ve been looking into which trends came to be and the actual ways in which fintech has truly influenced our day-to-day lives. Now, fintech covers a diverse array of companies, business models, and technologies used in lending, payments, wealth management, money transfer, capital markets, equity crowdfunding and insurance. In this article, we’ll be focusing our attention on automation in the banking industry.

Then: The ATM revolution

The automated teller machine, or ATM has been one of the most successful innovations the industry has seen. What started out as a machine for cash-dispensing services, became a “drive-up” ATM in the 1980s, and then a “talking” ATM with voice instructions in the late 1990s. Today we have video-enabled ATMs and cardless ATMs that use mobile and location technologies to identify bank customers and enable them to access bank services.

Any type of automation inevitably leads to the eternal question “How will it affect our jobs?” or even “How will it replace us?”. The ATM was the subject of the same debate even in the 1960s. Interestingly, as ATMs expanded—from 100,000 in 1990 to about 400,000 or so until recently—the number of tellers employed by banks did not fall, contrary to what one might have expected. James Bessen of Boston University School of Law argues that there are two reasons for this counterintuitive result. Number one, by reducing the cost of branch operations, ATMs made it possible to rapidly expand the number of branches. Even though fewer tellers were required in any single branch, new branches meant more tellers. Number two, ATMs freed tellers from some of the basic tasks and enabled them to focus on more “relationship-building” efforts and complex  activities. In fact, ATMs also introduced new jobs such as armored couriers to resupply units and technology staff to monitor ATM networks.

“Impact of ATMs on tellers from “Learning by Doing: The Real Connection between Innovation, Wages, and Wealth” by James Bessen” via

This particular revolution is not slowing down. If anything, like the technology it’s based on, it keeps evolving to meet the digital consumer’s expectations.

As far as other technologies that are revolutionising the banking industry go, in 2013, McKinsey predicted that AI and robotic banking will displace 110 million full-time workers around the world by 2025. As we move on to the Now part of your discussion, we’ll see that that was also an inaccurate prediction as banks have been creating new jobs in recent years for compiling and checking data on customers and transactions.

Technologies that were expected to go mainstream by 2017 such as machine learning, robotization and A.I. are still evolving and being tested to see how they can fit in the greater business plans of financial institutions. So far, banks have only deployed punctual solutions using pilots, before jumping in to change entire architectures. One large universal bank, for example, categorized its 900-plus end-to-end processes into three ideal states: fully automated, partially automated, and “lean” manual. This bank determined that 85 percent of its operations, accounting for 80 percent of the current full-time employees, could—theoretically—be at least partially automated. At the time of this analysis, fewer than 50 percent of these processes were automated at all. If an ideal level of automation would have been reached, almost 50 percent of the employees in operations could have been relieved of their back-office tasks.

Things have not changed to the degree that was predicted Then. Many processes at banks still rely on people and paper. Often, back offices have thousands of people processing customer requests.

However, we now have a better understanding of what automation entails, in the larger context of all business operations and talent management implications. In the past few years, many banks have enhanced some of their customer-facing, front-end operations with automated digital solutions. Online banking, for example, offers consumers transparency and convenience.

By reworking their IT architecture, banks are using automation to enable smaller operational units to run value-adding tasks, including complex processes, such as deal origination, and activities that require human intervention, such as financial reviews. Banks who are embracing digitization are able to improve work flows, automate decision making) and manage residual operations that must be carried out manually (such as resource planning software).

Some financial services institutions are already generating value from automation. One such example is JPMorgan, who is using bots to respond to internal IT requests, including resetting employee passwords. The bots are expected to handle 1.7 million IT access requests at the bank this year, doing the work of 40 full-time employees. Another example is Australia and New Zealand Banking Group’s deployment of robotic process automation (RPA) at scale. They are now seeing annual cost savings of over 30 percent in certain functions. Over 40 banking processes have been automated, enabling staff to focus on higher-value and more rewarding tasks. Leading applications include full automation of the mortgage payments process and of the semi-annual audit report, with data pulled from over a dozen systems.

Chatbots are one of the most widely used applications of A.I. in the banking industry. By enabling customers to interact with the bank through natural language conversations, chatbots provide an intuitive channel for customer inquiries, facilitating user friendly interactions and delivering a better customer experience.

Sweden’s SEB bank is one of a handful of large banks and insurers (including UBS and insurer VGZ) that have enlisted the help of chatbots or cognitive agents to deal with customers. SEB is currently working with software company IPsoft to get a cognitive agent called Amelia to act as a front-end customer service agent.

If we look at the future, McKinsey anticipates a second wave of automation and AI will emerge in the next few years, in which machines will do up to 10 to 25 percent of work across bank functions, increasing capacity and freeing employees to focus on higher-value tasks and projects.

All these new emerging technologies are coming together to form IPA or intelligent process automation, defined as the process that “takes the robot out of the human.”

“At its core, IPA is an emerging set of new technologies that combines fundamental process redesign with robotic process automation and machine learning. It is a suite of business-process improvements and next-generation tools that assists the knowledge worker by removing repetitive, replicable, and routine tasks. And it can radically improve customer journeys by simplifying interactions and speeding up processes.” 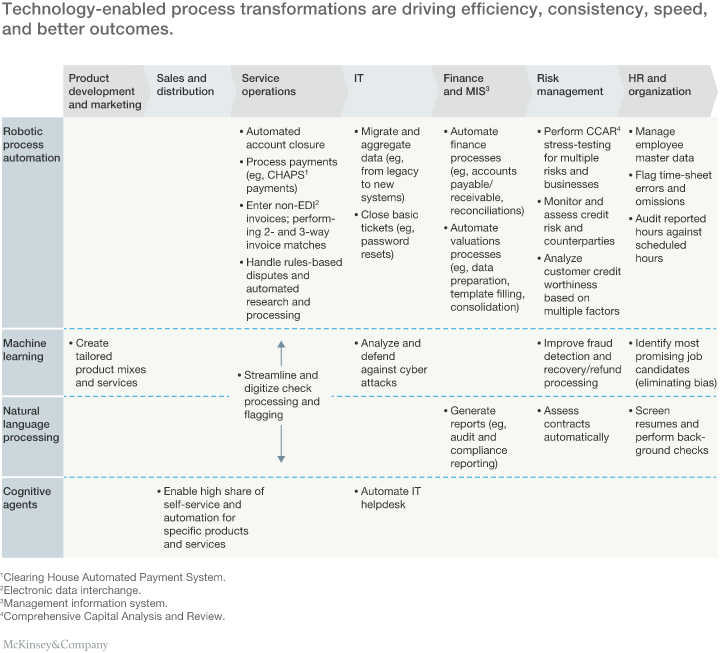 When will we see it in banks worldwide? Probably not in the next few years. But the change is already happening little by little, with every automated process and evey bank running pilots.

What hasn’t changed and probably will not change is the required synergy between man and machine. As computers become more intelligent, we need to adapt our own mindsets and skills sets to be able to manage them and enable them to deliver actionable results. Human effort is still required to drive innovation and anticipate how automation and technology in general will enable better, faster banking.

Rapid process automation in banking was once considered very unlikely to happen. But software development has become much more creative and reliable over the past ten years, enabling smarter and more efficient business processes. Automation continues to be a key competitive opportunity for banks. 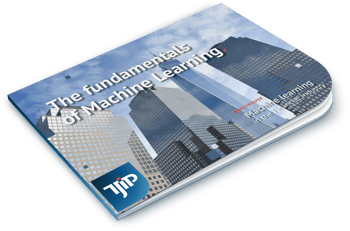 Analyze Your Customers’ Behavior To Predict What They Want

Tips and Tricks for Rolling Out a New Enterprise Digital System