From One Cryptocurrency To ICOs And Blockchain 3.0

The first cryptocurrency to capture the attention of the entire world, Bitcoin, was introduced in 2009 by Satoshi Nakamoto, just a few months after the collapse of the global banking sector. Designed as a new way of exchanging money, Bitcoin was the first decentralized cryptocurrency. As opposed to centralized electronic money and central banking systems, it uses an electronic distributed ledger to manage transactions between individuals, with no need for a financial institution as a third party.

What made Bitcoin so popular was its promise of anonymity and of a decentralized, peer-to-peer network structure that verifies transactions cryptographically.

In this article we’ll be taking a closer look at how cryptocurrencies came to be and how the blockchain technology underlying them changed over the last years, in a Then and Now overview.

Bitcoin was the first successful digital currency in the world. Built on what we now call the first generation blockchain technology , its supply was determined unequivocally from the onset. This is why owners of the cryptocurrency could only be able to spend what they had, and that the Bitcoin spent by the individual could not be spent again on another transaction (double spending).

Another core aspect to it was the fact that it was created to be open source, giving anyone the opportunity to learn from, build on and expand beyond it.

In time, Bitcoin revealed some drawbacks to this first generation blockchain. One of the most important one was the lack of any type of contract between participants to a Bitcoin transaction.

As Bitcoin adoption grew, recording transactions on the blockchain was not enough anymore. People started to need much more complex applications to be able to customize their transactions. A first generation coin that was deployed was almost impossible to change afterwards. Adding elements and building on it was not feasible (yet).

This gave way to what we now call the second and third generation blockchains.

Ethereum is the first second generation cryptocurrency. This new application of the blockchain technology made it possible for contractual information to be embedded in a transaction, in what we now call smart contracts. A smart contract is a contract that is coded, and subsequently uploaded to the blockchain. Whenever a contract is executed, every node in the network runs it, then uploads it to the blockchain. While smart contracts were not a new notion in the crypto space, this was the first successful application of the concept, enabling more elements to be included in transactions.

Launched in 2015, Ethereum is the largest and most well-established, open-ended decentralized software platform that enables smart contracts and distributed applications to be built and run without any downtime, fraud, control or interference from a third party. Ethereum is in fact a programming language running on a blockchain, helping developers to build and publish distributed applications.

Even though both Bitcoin and Ethereum are based on the principles of distributed ledgers and cryptography, the two differ in many technical (and significant) ways. One major difference is the programming language used by Ethereum, we mentioned earlier. This program is Turing complete, meaning it can solve any problem that a Turing machine can, given an appropriate algorithm and the necessary time and memory. Bitcoin, on the other hand, uses a stack based language.

But perhaps more importantly, the two applications differ in purpose. While Bitcoin was created as an alternative to regular money, Ethereum is developed as a platform that facilitates peer-to-peer contracts and applications via its own currency vehicle. Even though Bitcoin and Ether are both digital currencies, the primary purpose of Ether is not to establish itself as a payment alternative, but to facilitate and monetize the working of Ethereum to enable developers to build and run distributed applications.

One major drawback of the speed with which things change in the blockchain sector is governance. If the way we trade value becomes completely decentralized, some would argue we risk becoming a stateless global society. The lack of a governance model also makes it difficult for enterprises to adopt blockchain technology in their activities. Smaller companies, however, have found a way around this, with the creation of Initial Coin Offerings (ICOs).

Startups can use an ICO to bypass the highly-regulated capital raising process required by venture capitalists or banks. In an ICO campaign, a percentage of the cryptocurrency is sold to early backers of the project in exchange for legal tender (any official medium of payment recognized by law that can be used to extinguish a public or private debt, or meet a financial obligation) or other cryptocurrencies, but usually for Bitcoin. Regulatory initiatives have already been implemented for some of these ICOs to ensure that there is some kind of guidance around this method of raising funds.

It seems that even second generation blockchain applications have their own drawbacks. Besides governance, scalability and interoperability are two other major issues. The new coins built on the Ethereum blockchain do not work for large numbers of people. And there are many such coins. Another problem is that all these coins cannot “communicate” with one another.

This gives way to the creation of a so-called third generation blockchain.

To better understand this, we need to refer to a key concept in blockchain technology, which is called Proof of Work (POW). This is essentially what enables the creation of distributed, trustless consensus. POW is a requirement that expensive computations be performed by miners in order to facilitate transactions on the blockchain. As blockchain technology evolved, a new way of confirming transactions between nodes came to be, called Proof of Stake (POS).

Here’s a visual representation of how these two differ: 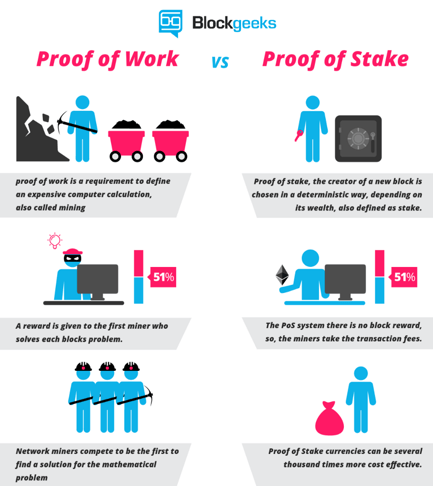 Proof of stake is a different way to validate transactions based and achieve the distributed consensus. It is still an algorithm, and the purpose is the same of the proof of work, but the process to reach the goal is different. The reasons behind this new method are energy savings, as miners consume a lot of energy to provide POW, and also the desire for a safer network, as attacks would prove to be much more expensive in the POS scenario.

“Dynamics will change as Ethereum moves to proof of stake. The power of miners will be replaced by anyone who holds a sufficient amount of Ether to run a virtual miner (a “validator”). This is especially true as solutions like 1protocol will allow even the smallest Ether holder to participate, flattening the distinction between a miner and a user, and potentially reducing the biggest centralization risk in Bitcoin.”

The third generation of blockchain will enable the blockchain to customize and connect with other blockchains. This will make it possible for two different sets of blockchains to communicate with each other, by transfering data and creating a secure ecosystem. Some call it The Internet of Blockchain.

Initiatives are already on the way. Aion, for example, designed a protocol that enables the development of a federated blockchain network, making it possible to integrate dissimilar blockchain systems in a multi-tier hub-and-spoke model, similar to the internet.

Another great example is Cardano, a protocol that implements the proof of stake algorithm. Ada is the cryptocurrency on the Cardano blockchain. With Ada, holders can send value between friends, pay for a good or service, deposit funds on an exchange, or enter an application.

Also introducing a new consensus mechanism, DFINITY is building a new kind of public decentralized cloud computing resource. According to its creators, business applications running on this computer will be unstoppable and won't need to involve complex components such as databases, backup and restore systems or Amazon Web Services, allowing costs to be cut by 90% or more by reducing the supporting human capital required.

Skycoin is also an example worth mentioning here. Skyledger’s consensus is based on the will of the network – a “web of trust” -  and it’s called Obelisk. It creates a web of trust in which each node has a public key, and each node subscribes to other nodes. For example, if you know someone personally, you can add their public key to your trust list. Your nodes can then subscribe to each other and publish messages. Through this process, nodes can reach a global consensus.

Predicting what comes next is almost impossible. Things are changing so fast that all we can do is become fully immersed in understanding and exploring the potential of blockchain 3.0 before we can even think about a blockchain 4.0. Ten years from now we might have no states, no corporations, just global, decentralized transactions. Or we might have unimagined new forms of state and governance. Either way, understanding the journey of blockchain and its evolution is crucial to building life-changing products and services, which is what we aim to do for our clients.

Automation is the new outsourcing: RPA vs BPO

A CEO’s guide to digital transformation